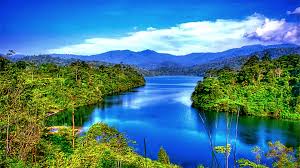 What is a River ?

A river is a natural watercourse flowing towards the ocean , a lake or another river . Rivers have collected many names over time and some of these are ; streams , creeks and brooks . The are also called burns , rivulets , rills , runs , burns and becks .

Many of these definitions are local and used for smaller rivers , with streams and creeks being quite popular . Some rivers will flow into a hole in the ground and dry up . These are called Dry Rivers .

A river begins at a source , follows a course , and ends at its mouth . A river will flow through a channel , will have a bed , and a right and left bank .

How Rivers Have Been Used

Rivers have been used for drinking water , irrigation , and as a food source , in the case of fishing . Rivers are also used as a means of transportation , a source of hydro-electric power and unfortunately as a means of waste disposal .

Transportation , hydro-electric energy procurement and waste disposal have had a very negative impact on rivers . As a means of transportation , rivers have helped greatly in the development of all the continents with the exception of Antarctica .

They provide many hours of recreation in the great outdoors and a lot of outdoor tech has been developed for this purpose .

3)   the longest river in the United States of America is …

6)   the longest river in Australia is the …

7)   the longest river in Singapore is the …

8)   the longest river in South America is the …

Thank you for participating in my longest rivers quiz . Feel free to comment on this quiz and which country or continent did you least associate with long rivers ? Thank you for all the wonderful comments that you post on my website .